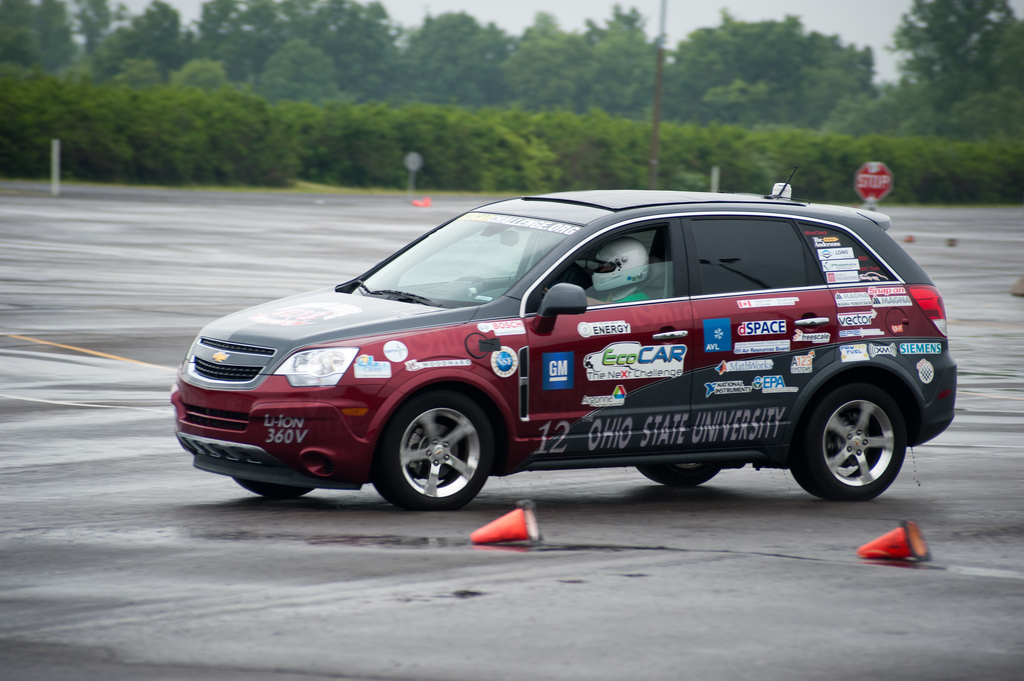 In day six of the EcoCAR finals, the team continued a string of good performances. The team split up sending a few people to the proving grounds to get the vehicle charged up for a run at the trailer tow event. The remaining team members continued practicing for the two presentations that would occur later in the afternoon. After getting charged, the Ohio State vehicle went out for the towing event, which requires pulling at “tow dyno” which simulates a 1500 lb trailer up a 3.5% grade at 45 mph for 20 minutes. The vehicle performed as designed, operating in all electric mode for the entire event.

Once the vehicle returned, it was time for a bit of a makeover. The week of testing had left the vehicle a little less then shiny – and in the Static Consumer Acceptability (SCA) appearance is important. A trip to the GM carwash and an small army of people cleaning every square inch of the car soon had things looking good. The SCA event went well, with team members presenting the many enhanced customer features of the vehicle, such as the touch screen, new center console, solar panels and all-electric range. Although we don’t know the six judges' scores, the team did an outstanding job as showcasing the vehicle.

The final scored event for the Milford part of the competition for the
team was the Vehicle Testing Complete (VTC) event. In VTC, the team
demonstrates the vehicle is viable for production and has met all design targets, in addition to judging quality of workmanship on the powertrain. There were roughly ten experts acting as judges and it was clear that the three Ohio State team members delivered a memorable presentation of the vehicle. The team received a number of congratulatory handshakes and statements from the judges, which hopefully bodes well for this event. As with most of the events, scores won’t be released until the award ceremony.

Tomorrow should be a relatively relaxing day for the team, allowing some time for some sleep as well as a chance to polish the remaining four presentations that will be given in Washington, DC. If time allows, the OSU EcoCAR will go out one last time to try and improve a somewhat lackluster 60-0 braking distance– which was significantly less then that measured at Transportation Research Center.

Other than this, the team will be packing up their pit area and getting ready for a road trip to Washington, DC for the final phase of the competition.