Obama toured the Center for Automotive Research (CAR) March 22 before a speech on American energy at the Recreation and Physical ActiC, where he was introduced by Vijay Gadepally, PhD candidate in Electrical/Computer Engineering and president of Ohio State's Council of Graduate Students.

At CAR, undergraduate and grad student researchers showed projects to the president. 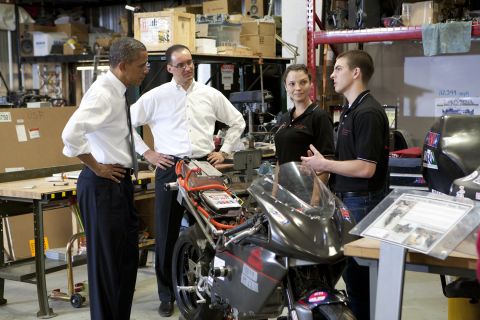 "It was an honor to explain our project to the president and show how we are trying to advance alternative energy transportation," said Evan Maley, an undergraduate in mechanical engineering and one of the Buckeye Bullet team leaders.

The Buckeye Bullet holds the land-speed record for a battery-powered electric vehicle, more than 307 miles per hour; Maley said breaking the 400 miles-per-hour barrier is next.

In addition to the Buckeye Bullet team, Obama met students and faculty working on the EcoCAR, a fuel-efficient student project that placed No. 2 in an international competition field last year. (Watch the EcoCAR team prepare for competition.) He also learned about biofuel development; clean coal technology; and solar research.

Julia Hare, an undergrad in electrical and computer engineering, showed the Buckeye Electric Motorcycle to the president.

"I'm excited that President Obama is turning to some of the youngest and most innovative minds here at OSU's Center for Automotive Research to learn about advancements in renewable and efficient energy," Hare said.