The competition will take place at the Hockenheimring Baden-Württemberg motor racing circuit, with events beginning July 29 and ending August 3. Over 100 schools from 20 different countries will be participating in this year’s competition. 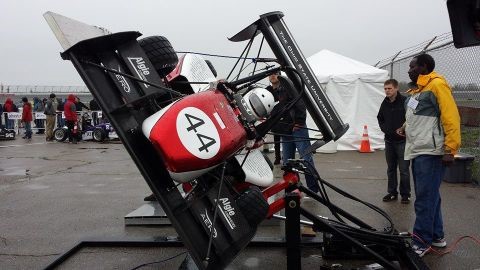 Car #44 undergoes a 60 degree tilt test before competition at the May 2014 Formula SAE-Michigan Competition.

The Formula Student competition requires students to incorporate intensive experience in building and manufacturing with the economic aspects of the automotive industry. Over the past few years, the Formula Student Germany competition has emerged as the premier competition where many of the best teams from around the world come to prove their cars.

Students build a single seat, open-wheeled race car, competing in a series of tests—both static and dynamic. A panel of experts from the motorsport, automotive and supplier industries evaluates each team’s car based on a variety of factors. While the speed of the vehicle is taken into account during judging, construction, performance and financial and sales planning are also weighted in the team’s overall score.

In May of this year, the Formula Buckeyes team proved their vehicle at the Formula SAE-Michigan Competition. Despite not finishing the endurance event, the Buckeyes placed 24th out of 109 cars from all around the world. They achieved top 20 finishes in design, acceleration and fuel efficiency.

Watch for updates from the track as the team competes at Formula Student Germany this week. The team will be tweeting from @FormulaBuckeyes.