A royal partner visits the Center for Automotive Research

August 31, 2016 His Serene Highness Prince Albert II of Monaco visited The Ohio State University, where he met with students and researchers working on sustainability-minded projects. His first stop on the whirlwind tour was the Center for Automotive Research. 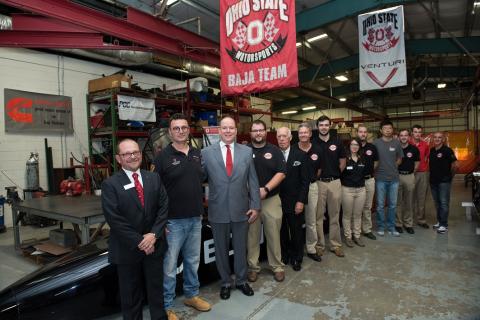 Members and supporters of the Venturi Buckeye Bullet team with Prince Albert II (third from left).

After an initial welcome by David B. Williams, dean of the College of Engineering, and Giorgio Rizzoni, director of the Center for Automotive Research, the prince toured several of the center’s research laboratories. Accompanied by His Excellency Bernard Fautrier, vice president and CEO of the Prince Albert II of Monaco Foundation, he interacted with researchers working on electric motors, autonomous vehicles and other automotive technologies aimed at environmental sustainability, including the university’s new hydrogen fuel cell bus.

The highlight of the tour was the stop at the student projects building, where the international record-holding Venturi Buckeye Bullet 3 electric car was built. Venturi, an electric automobile manufacturer based in Monaco and a close environmental ally of the prince, sponsored the research that led to the car’s development and has continued to work side-by-side with students throughout the vehicle's design, build and testing. Gildo Pastor, CEO and owner of Venturi Automobiles and Consul General of Monaco in the U.S., joined in introducing the prince to the students working on the vehicle.

David B. Williams, dean of the College of Engineering, welcomes Prince Albert II.

The prince receives a behind-the-scenes look at work being done at the Center for Automotive Research.

While meeting the Venturi Buckeye Bullet 3 team, student leaders presented the prince with a one-of-a-kind drawing of the vehicle, created by professional artist J.D. Orr.

Not to be missed, the prince also greeted four of the other student project teams housed at the center, learning how each is working to create technologies to improve the environment.

The hydrogen fuel cell bus was a stop on the prince's tour.

At the tour’s conclusion Carla Bailo, Ohio State’s assistant vice president of mobility research and business development, provided an engaging presentation of Columbus’ recent Smart City award, citing the university’s integral involvement. This was followed by an overview of The Prince Albert II of Monaco Foundation by Bernard Fautrier.

During his time at Ohio State, the prince visited a number of other locations around campus, as well as participating in a roundtable discussion with Ohio State President Michael V. Drake and Provost Bruce McPheron, where he gave a distinct message to students. Read more about his visit here.