The Ohio State College of Engineering’s Underwater Robotics team competed against 44 other teams in the 2017 International RoboSub Competition, July 24-30 in San Diego, CA. The team successfully made it to the semi-final round of competition after overcoming time constraints and only being able to use four of their 10 thrusters, the electric motors that the robot uses to propel itself through the water. The team was able to build the entire electrical system, including designing and building printed circuit boards in about a week, to get the robot working at competition. 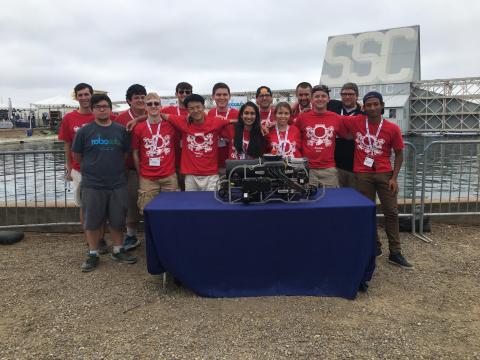 “I am incredibly proud of how much work the team put in to get the robot up and running,” said August Mason, vice president of the Underwater Robotics team. “When we arrived in San Diego we worked non-stop, most nights up until 6 a.m. at the pool to build the robot up enough to complete a few tasks.”

The team designed and constructed a fully autonomous underwater vehicle that has to travel through an obstacle course completing various tasks such as hitting certain colored objects, navigating with computer vision and firing torpedo’s. To complete a run, the team cannot interface with the robot aside from pressing the start switch.