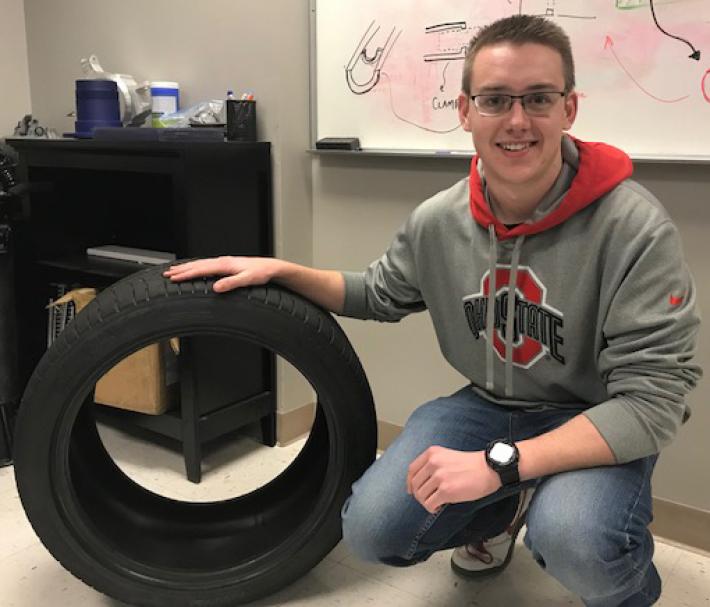 When asked why he chose to study engineering, Ryan Walton quickly replied "cars and physics!"

"I got into cars as soon as I started driving and I developed an enjoyment of physics and a better understanding of the physical world in high school. I thought mechanical engineering would be a practical union between the two and I’m very happy with my choice," said Walton, who is currently working on his thesis as a master’s student in mechanical engineering.

With hopes to graduate this semester, Walton spends a majority of his time working on his thesis, researching tire/surface interaction. He is investigating how different road surface parameters, specifically texture and topology, impact tire friction (grip) generation through the contact patch of the tire. Through his research, Walton hopes to be able to predict tire performance by taking measurements of the road surface and develop a better understanding of the fundamental mechanisms causing friction between a tire and road surface.

In addition to what Walton is learning from his research, he has also gained valuable knowledge from his advisors, Jeff Chrstos, research scientist at the Center for Automotive Research and Rebecca Dupaix, associate professor in the Department of Mechanical and Aerospace Engineering. He has also had the chance to learn from the institutions who have expressed interest in his project including the Ohio Department of Transportation and Transportation Research Center. "The collaboration and sharing of ideas between other experts at these institutions is awesome," said Walton.

“Ryan has a contagious enthusiasm for his research,” said Dupaix. “He loves the hands-on aspects of collecting friction data or taking core samples from the side of a busy highway, but is also fascinated with analyzing large datasets and finding ways to make physical sense of statistical parameters.  His energy and excitement about the project are what have enabled him to build such a diverse team of collaborators, from both industry and government.”

Walton received his undergraduate degree from The Ohio State University and completed two summer internships with Honeywell, where he worked on the pressure transducer manufacturing line, and Battelle where he took on a systems engineering position and was tasked with integrating gas and liquid chromatic mass spectrometers into a mobile lab environment.

As a car enthusiast, Walton was naturally attracted to the Formula Buckeyes student motorsports team which he has been a member of since his sophomore year. Being on the team has given him access to countless opportunities that students can't find in the classroom.

"Where else can you get real experience designing components and systems and apply your knowledge in such an impactful way," said Walton.

Another perk of being on the Formula team-getting to know others who share your same passions and interests. "I’ve met quite a few friends," said Walton.

When not working on his thesis or in the Motorsports Garage, you'll likely find Walton riding his motorcycle, snowboarding, hanging out with friends or watching college football. "Pretty typical young 20’s stuff," jokes Walton.