A lifelong learner, Santhosh Tamilarasan’s inquisitive nature is what has driven him to obtain his Ph.D. and continue his career in the automotive industry.

“My research interests have always pushed me into doing interesting/innovative things, and the results are the patents that I have and products that I have developed,” says Tamilarasan.

Following his time at Delphi, India, he returned to school and received his master’s degree in automotive systems at IIT Madras where he graduated first in his class!

“There is a myth that theory and practical implementation are two unrelated things. So, whatever is taught in the universities is relevant only for paper publications but not in the industry,” says Tamilarasan. “I realized that industry always teaches you the real-world implementation and then when you come back to university for graduate courses, you will be able to understand the reason why you did things in a particular way while working in the industry. This is the missing link that will help bridge the gap between theory and practice. I had many ‘wow moments’ when I started my graduate course and I was able to connect the dots between the math equations and the actual performance of the part in a vehicle.” 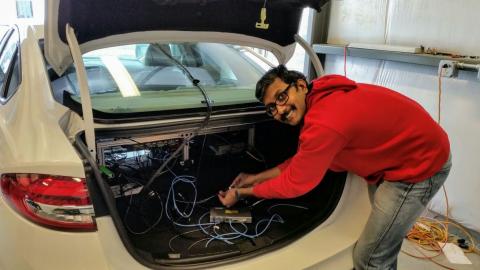 Tamilarasan in the Autonomous Driving Lab at CAR

As a Ph.D. student at Ohio State, Tamilarasan spends his days in the Automotive Driving Lab working on CAR’s ARPA-E project. He develops connected and autonomous vehicle algorithms for fuel-optimal operations which involve Eco-Approach & Departure and Eco-Cooperative Adaptive Cruise Control and other algorithms that utilize the V2V communications and optimally driving the vehicle. Tamilarasan also works on other topics like High-level decision making for longitudinal motion control, convoying/platooning. He finds his research in his lab very exciting because it is a culmination of robotics, AI, and automotive systems.

“It's so much fun to program a deep learning network for computer vision applications like lane identification and object deduction for the autonomous vehicle. Having autonomous vehicles in our lab and the ability to test our algorithm in real time gives a real satisfaction,” says Tamilarasan.

With this expansive education and experience under his belt, Tamilarasan hopes to return to the industry after graduation and develop autonomous vehicles that are efficient and environmentally friendly - redefining the automotive industry.

“There are only very few places like CAR, where I could see the academics and industry working together very closely, that the students have a rich experience of the practical implementation,” says Tamilarasan.

In addition to research, Tamilarasan has found a passion for teaching and sharing his love of learning with others. He currently serves as TA for the Autonomy in Vehicle course, taught by Levent Guvenc, where he has the opportunity to develop homework assignments and support students, which he finds intellectually engaging. He hopes to continue lecturing in a part-time capacity after graduation.

When asked why he chose to go into engineering, he says it was an obvious choice! His father was an engineer and analytical thinking had been “baked into him since childhood.” “At age of 3, when computers were not so common in households, I had an opportunity to have access to an ATARI computer at home and BASIC language programming and continued to grow with the computers,” says Tamilarasan. “When it was time to decide on the career path, engineering was the obvious choice.”