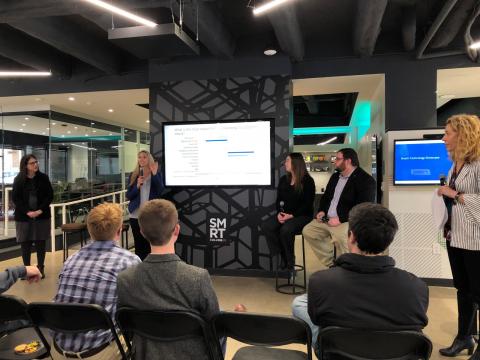 Energy and mobility experts from The Ohio State University are pointing to future research needs that could change how we move around the campus and the city.

Kate Bartter, executive director of the Sustainability Institute at Ohio State, moderated the panel for the Smart Cities Research and Innovation Series. Popping quizzes on the live audience, Bartter steered the conversation to discuss issues like where our energy comes from, how we move millions of people around central Ohio and what’s convincing drivers to ditch the gas-guzzler and go electric.

One of the first points of discussion was the continued growth of the single-driver automobile and the pressures that trend is placing on energy use and the environment. David Cooke, assistant director of research operations at the Center for Automotive Research, said in 2010 that there were more than 1 billion cars in use worldwide. That number could double by 2035.

“What does that mean and, more importantly, what are The Ohio State University and the Center for Automotive Research doing to help us think through what this future might look like?” Bartter asked.

Cooke is among the CAR research staff focusing on sustainable mobility and smart city initiatives. He said the current trends would put pressure on energy supplies and the environment because of pollution and greenhouse gases.

“In a very short number of years, we could double global energy demand for vehicles if something doesn’t change and if we use vehicles in the same way,” Cooke said.

Some of those changes include autonomous vehicles, and more ride-share options like Uber or Lyft and public transportation. Beth Snoke, the university’s director of Transportation and Traffic Management, said Ohio State would be leading the way on innovative transportation solutions.

Snoke said the university continues to transition its bus fleet from gas or diesel-powered buses to ones powered by cleaner compressed natural gas. Ohio State has also experimented with buses powered by hydrogen fuel cells.

Part of the challenge will come from tailoring different types of transportation to the diverse needs of the population. Snoke said, for example, busing demands for students are different from the needs of nurses at the Wexner Medical Center.

Nicole Sintov, assistant professor of behavior, decision-making and sustainability in the School of Environment and Natural Resources, is an environmental psychologist. She said progress and change would come down to understanding human behavior.

“We buy things not only because they serve practical purposes but also because they say things about us. Particularly cars, which is a very visible object or visible signal of our identity,” she said.

Sintov noted one of the reasons people will buy electric cars or other low-emission vehicles is because they feel better about making an environmentally conscious decision.

Panel members pointed out it’s not only transportation that’s driving energy use. Caitlin Holley, project manager for ENGIE Services, said the university is like its own city, and finding ways to be more efficient in Ohio State’s micro-grid will make a big impact.

ENGIE is partnering with the university on a unique energy management project. One goal of the partnership is to improve energy efficiency on the Columbus campus by at least 25 percent in the first decade of the agreement.

The panel discussion is part of the university’s role as the primary research partner for Smart Columbus. In 2016, the city won the U.S. Department of Transportation’s first-ever Smart City Challenge. The city was awarded $50 million in grant funding to study and, ultimately, transform mobility in central Ohio.