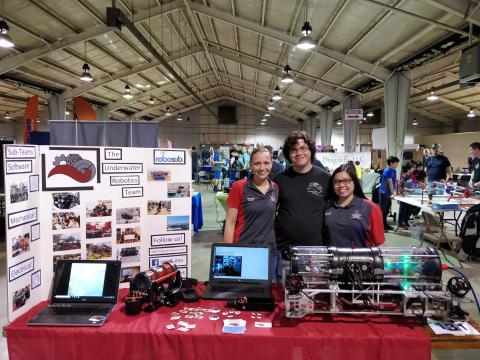 The Ohio State University Underwater Robotics Team was stationed at one of 90 exhibits available to 1,300 visitors at MakerX on April 6. MakerX is Columbus’ maker festival where hobbyists and professionals gather to share their creations. Exhibits feature a variety of crafts ranging from wood carvings to drones.

MakerX served as a perfect opportunity for the team to share their latest innovations and to teach Columbus residents about underwater robotics. The team also got to network with like-minded individuals and potential sponsors.

The team showcased their current competition vehicle, Maelstrom, and their outreach vehicle, STEMbot. Benji Justice, the team’s president, said they were excited to share their progress with the community.

“Maelstrom is our pride and joy,” Justice said. “That vehicle is the culmination of the team’s efforts and is a truly impressive display of what Ohio State’s engineering students are capable of. When people first see a robot like ours, we often hear things such as, ‘I didn’t know something like that existed!’”

STEMbot, a low-cost, PVC, radio-controlled robot, showed visitors that getting started with underwater robotics is easy.

The team attended the first MakerX event in 2018, and they look forward to attending again next year. They hope to have access to a pool, allowing visitors to experience the robots for themselves.

“MakerX serves as an opportunity for the team to give back to the amazing Columbus community by sharing a bit of our knowledge and inspiring the next generation of engineers,” Justice said.

The team will visit fourth and fifth graders at Alum Creek Elementary School in Lewis Center, Ohio on April 15. Shortly after, the team will head to Chicago, Illinois to showcase their work with RoboNation at the AUVSI Xponential 2019 conference from April 30 through May 2. Fans can follow the Ohio State Underwater Robotics Team on Facebook, Twitter and Instagram.

Video: In a Nutshell: Center for Automotive Research

Racing to the Skies