Collaboration is Key in Success of New TRC SMARTCenter 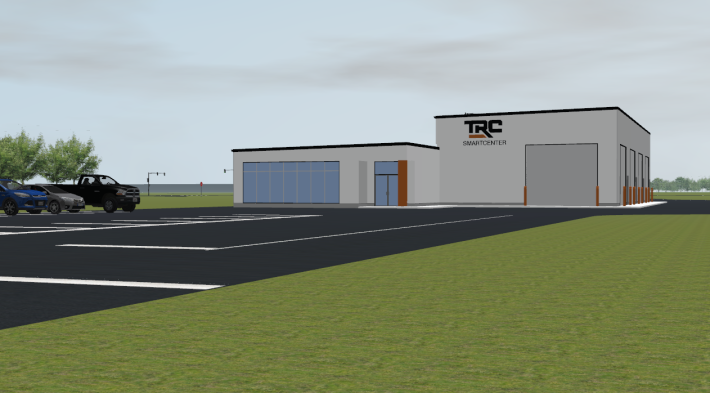 The Transportation Research Center (TRC) is near completion of its state-of-the-art SMARTCenter, an automated and connected vehicle and testing facility designed to replicate a variety of real-world scenarios for passenger and commercial vehicles.

Prior to breaking ground on the last phase of the project, engineers at TRC enlisted the help of students in CAR’s Driving Dynamics Lab (DDL) to create a virtual, drivable terrain that can be evaluated before real world construction is completed.

“We’re excited to open our new 540-acre testing center that will become North America’s most advanced proving grounds for automated and connected vehicles,” said Brett Roubinek, president and CEO of TRC Inc. “Our partnership and collaboration with Ohio State – and CAR – have helped make this project a reality. The Simulator Lab will provide remote training opportunities for years to come to help students experience what engineers and drivers at the SMARTCenter will discover when they visit the facility.”

This project was equally beneficial for the DDL because they were able to refine their ability to create terrain simulation from CAD files rather than pre-built roads.

“By modeling the proposed roadways on the simulator, project planning files were converted to define the virtual terrain,” said Jaxon Wilkerson, a mechanical engineering student and GRA in the DDL. “Modeling the roadway virtually allows for another way the design can be verified. More complex roads that balance difficult turns, elevation changes and different lane markings can be driven before breaking ground on a construction project. Here, the virtual SMARTCenter gave a human driver a chance to drive the complete course prior to construction being complete. We were able to drive the roadways to get a sense of the layout and to observe sensor interactions.”

Additionally, since the SMARTCenter is specially designed for testing automated and connected vehicles, the team had the unique potential to test similar sensor-based control systems on the virtual SMARTCenter. This ability allows for simulation testing prior to closed-course testing.

“With a few conversions, the same vehicle control programs that control real vehicles can first be tested at the DDL,” said Wilkerson. “With the current software configurations, autonomous and connected systems can be tested prior to taking a real vehicle to the SMARTCenter. Virtual sensor messages from LiDAR, radar, ultrasonic, GPS, and/or cameras can be used to control the vehicle model. Keeping a driver-in-the-loop can hasten the design process while maintaining a safe environment.”

“This project essentially provides prototype testing up to level 4 autonomous vehicle configurations. It’s giving us the chance to figure out whether the simulator is really good at assessing ADAS systems,” said Ruban Sekar, a mechanical engineering student and GRA in the DDL.

Not only did this project benefit TRC and the DDL, it also provided a unique, real world assignment for Max Martinez, a high school senior who played a large role in the SMARTCenter virtual terrain for his three week Capstone project.

“Having Martinez create the terrain was a way for us to evaluate and demonstrate the effort level required to create a virtual terrain,” said Research Scientist, Jeff Chrstos who runs the DDL. “He came in with zero experience in the simulator or most of the tools he needed to use and with the help of Jaxon got the SMARCenter terrain created.”

The DDL has served as a teaching tool for seven high school and college interns since its inception nearly three years ago.

“These interns have done the vast majority of the work getting the lab and driving simulator up and running. Without their efforts, the lab wouldn’t exist,” said Chrstos. “The interns have gained experience in design and fabrication, electronics, control systems, coding for real-time, data analysis, computer graphics and interacting with external vendors.  While each of these areas is valuable, the most important part is seeing how they all are used together to create a valuable engineering tool that will be used for research projects for many years.”

“Interning here has been a great way to gain experience before entering college,” said Phie Rodriguez who is completing her second summer internship in the DDL. “By having a large group of people working on these projects, we’re able to cover a broad range of work and we all have the chance to focus on an aspect of the project we’re really interested in!”