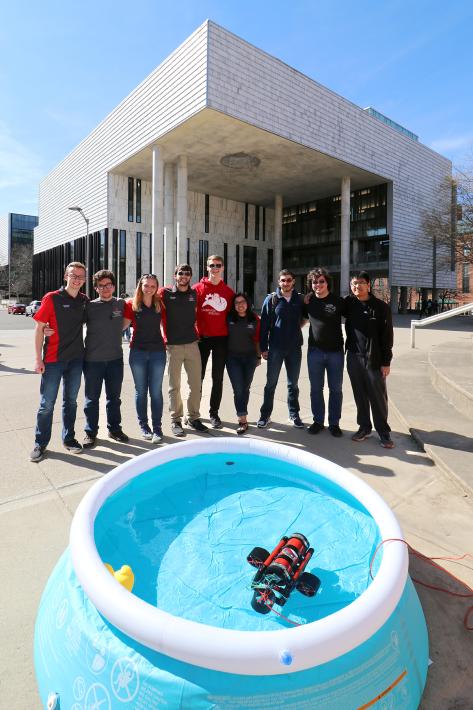 Outside Knowlton Hall this summer on campus, STEMbot went for a swim. Pizza was served. Onlookers stopped by to watch and chat.

Watch a short video interview with the team

“Not a lot of people know who we are, but we build autonomous submarines,” Jennifer Humanchuksaid, a third-year electrical and computer engineering (ECE) student and member.

This year, however, all eyes are on Puddles – the team’s fitting name for a larger competitive autonomous submarine officially debuting at the international AUVSI RoboSub 2019 competition in San Diego this month, July 29 to Aug. 4.

The team is determined to make a name for itself at the competition. The students came close in 2018.

“We’re really hoping this year we’ll be in the finals,” Humanchuck said.

UWRT is an interdisciplinary student project group specializing in the design, construction, and operation of autonomous underwater vehicles (AUVs). Each vehicle is designed to self-navigate through a series of tasks, mimicking ongoing research in Autonomous Underwater Systems. 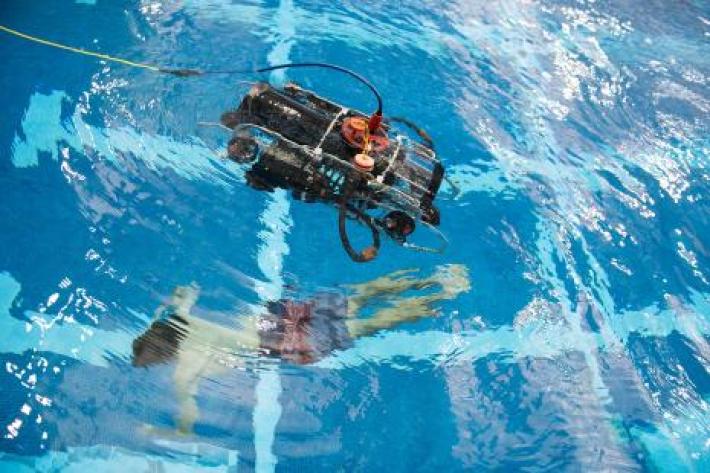 “We design it so we can throw it in the water and it does its own thing, completely on its own,” Humanchuk said.

“I just got a job with Battelle because they saw all of my work with acoustic systems within the electronics of the robot,” he said. “This team is a great experience. It’s a great resume builder. People love to see that you’ve been gaining real-world experience.”

Ohio State ECE students are involved in a broad scope of motorsport engineering teams, from EcoCAR and Buckeye Current to the Baja Buckeyes, because their technological knowledge offers a broad platform of applications.

Benji Justice, also in ECE, is the current team president.

"Joining the UWRT was probably the best decision I made during my four years at Ohio State. I discovered the team at the annual Engineering Student Involvement Fair,” he said. 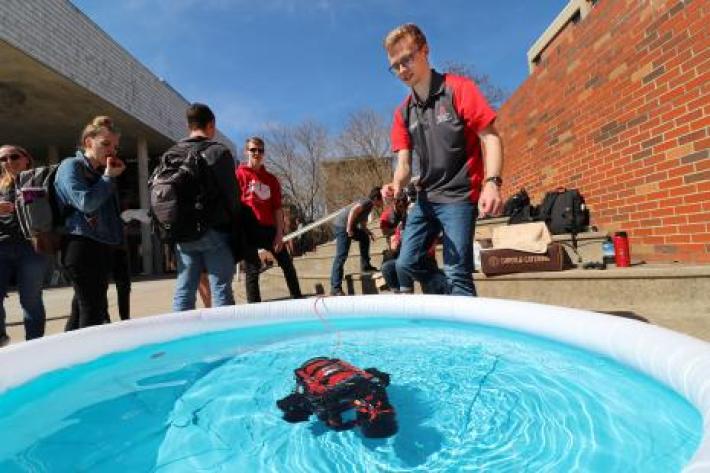 UWRT performs a number of STEM outreach events in the Columbus community as a way of giving back and generating more interest in the field of robotics. At the Ohio State Fair, the students annually design and build an exhibit to educate the local community about marine engineering. This involves demonstrating smaller AUVs like STEMbot, which guests can engage with in a small pool. The team also presented at MakerX: The Columbus Maker Expo, an event showcasing all types of creators, and visit COSI each year to educate children about careers in engineering and give small lessons in underwater robotics – speaking on topics like buoyancy, achieving water tight housings, and basic electronics.

In proof the team’s pool STEM demonstrations effectiveness, Justice said he enjoyed getting to operate an underwater robot and talk to the team members about how it worked.

“I had never seen anything like it. I was hooked. Wanting to learn more, I decided to join and the rest is history,” he said.

Students from a variety of majors are responsible for building every aspect of the vehicles, including machining the housings, soldering the circuit boards, and developing the software. What Miller finds the most rewarding is collaborating with other student engineers toward a common goal.

Justice said URT helped him develop technical, leadership, business and communication skills during his time serving different roles on the team – plus three summer trips to San Diego for the RoboSub competition.

“My experience with the team has really been an invaluable, defining piece of my experience here,” Justice said. “I will never forget the memories made and lessons learned with this team."

“You’re working with people who think the same way you do, who want to experience the same challenges that you like facing,” he said.

Humanchuk currently designs the circuit boards for the robot. Starting in the fall, she will help shape the vision of the team going forward.

“I joined the team because I really like robots,” she said, “and now next year I’ll be the team president.”

During the summer of 2018 Humanchuk interned for Northrop Grumman working in the Signal and Conversion Technology department.

Another ECE student and team member, Gus Workman, said they take their job seriously - they have to.

“Safety is a big concern because it’s around water,” he said. “You have to prepare for the worst-case scenario. A lot of what we do is making sure to put fuses in, so if (the robot) does short out we have no issue with it electrocuting somebody. I think it’s all about managing different systems, all combining different electrical signals.”

Workman, a junior majoring in Computer Engineering and Chinese, joined the team in 2017. His primary responsibilities are working with the firmware for the compressor board. He recently completed an internship at Garmin, where he embedded software in aviation display units.

For those interested in joining the team in 2019, members are often recruited in the fall. The group typically meets twice a week at the Center for Automotive Research on Sundays and on campus once a week.

My internship at Argonne National Lab