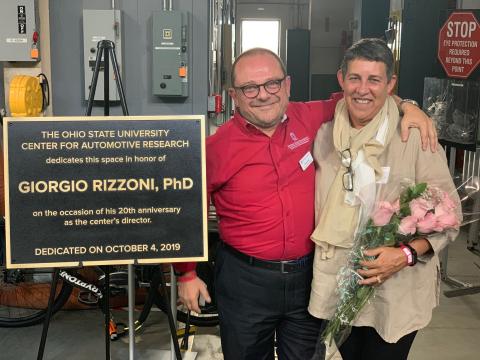 Kathy and Giorgio Rizzoni pose for a photo with a plaque presented to Giorgio on the 20th Anniversary as director of CAR. For the past 20 years, Giorgio Rizzoni has led the Center for Automotive Research (CAR) with a passion and commitment that is unrivaled. He has created industry collaborations, recruited talented students and turned CAR into a world-class research facility with some of the best and brightest research staff and faculty members by his side.

This milestone anniversary was celebrated with a surprise reception on Friday, October 4, following CAR’s External Advisory Board meeting.

A faculty member in the Department of Mechanical Engineering, Rizzoni was appointed CAR’s Director in 1999. From there, he not only led the center, but numerous student motorsports teams including the ‘Smokin’ Buckeye and the world’s fastest electric vehicle, the Venturi Buckeye Bullet.

“Having been Dr. Rizzoni’s assistant for 10 years afforded me many opportunities to see him perform his duties as director,” said Pat Valentine. “The underlying component in all his actions was his deep commitment to CAR’s growth and the preparation of his students for industry jobs. Numerous times I left meetings with the thought that we’re all on the ground and Giorgio is at twenty thousand feet. But that is what it takes to grow an organization like CAR. Giorgio always impressed me and everyone else with his ability to stay 20 steps ahead of everyone else.”

While running the center, Rizzoni has also kept busy at home with hi

“CAR has been like a fourth child for Giorgio - a being to nurture, love and cherish,” said Kathy. “We at home have celebrated CAR’s successes with him over the years. Giorgio's boundless energy and love for what he does has made his journey with CAR one of joy and the main mission of his life outside of our family: to help his students achieve. I can speak for both myself and for our children when I say that we are deeply proud to have supported Giorgio in his work, because his work is so meaningful for the future, not just of each and every student, but also, indeed, for our world.”

Highlights of the anniversary celebration included remarks from long-time colleagues, Professor Emeritus, Yann Guezennec and Associate Professor, Marcello Canova as well as the presentation of a plaque acknowledging Rizzoni’s years of service, which will hang in the newly renovated CAR lobby.

“Clearly a single person cannot take sole credit for so much success, and Giorgio would be the first to tell you this. However, I firmly believe that it has been Giorgio’s vision, selflessness, interdisciplinary spirit, and team-building leadership that have made CAR the success it is today,” said former colleague and longtime friend, Steve Yurkovich.

Video: In a Nutshell: Center for Automotive Research