Growing up in Tanzania, David Mapunda had a close friend whose dad, a physics lecturer, brought home a telescope one evening.

Mapunda and his friend watched the moon and were astounded by what the telescope allowed them to see. His friend, a space nerd by then, told him all about telescopes, space, and NASA — even proclaiming that he would one day be a NASA astronaut. However, Mapunda wasn’t sure what he wanted to do with his life but knew he wanted to work with planes.

A few years passed, and Mapunda found himself moving ever so slightly to aviation, taking science classes and even drawing designs of various planes and engines.

“I was literally living his dream,” Mapunda said, “He inspired me to strive for something greater than just a job; he made me pursue a purpose, something that’s not very common for youths in developing countries.”

Starting this semester, Mapunda, a first-year graduate student, has enrolled at Ohio State. However, his journey from his home country of Tanzania to aerospace engineering on campus wasn’t a direct route.

As a kid, Mapunda found an affinity with many different subjects and hobbies especially loving to sing. He was exceptionally good at math and science and was fortunate enough to go to a school that facilitated STEM learning.

“I think it was something that I was just really good at, fixing stuff and problem-solving. However, somewhere in middle school, I started becoming more attracted to engineering, and began designing different personal designs of propulsors and stuff like that,” Mapunda said. “That was also fueled by watching Iron Man. Tony Stark made me want to build my own flying exo-suit.”

Following his passion, Mapunda was able to travel to China as part of the Confucius Institute. This organization connects people from around the world with Chinese culture. There, he spent some time in the Zhejiang province, experiencing the tertiary education system and the culture and concluded it would be a great place to get his degree.

He enrolled into Zhejiang University of Technology, pursuing BS in Mechanical Engineering. He made the decision following his father’s advice, “to seek a general foundation in engineering before specializing.”

Following his graduation in 2019, he changed majors to aerospace propulsion theory and engineering for his master’s degree and attended Nanjing University of Aeronautics and Astronautics before applying for Ph.D. at Ohio State. 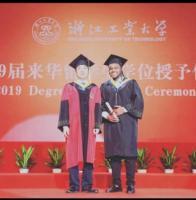 After completing the first year of his master’s degree, Mapunda knew that he wanted to continue his education, but didn’t want to do it in China, so he searched for his next opportunity. He began by gathering a list of 22 schools and reaching out to them.

“Out of about 22 plus universities that I had shortlisted and contacted, half of them replied. From those, only the professors from Ohio State showed interest and had research I genuinely liked,” he said. “It’s like something was pulling me here.”

Mapunda began searching for internship opportunities at Ohio State to build that relationship, and luckily, he found one.

“Professor Rizzoni reached out to me about the NASA ULI project, after being connected by the EmPOWERment coordinator Diane Boghrat,” said Mapunda. “He told me they had a lot of experience training electrical engineers to become knowledgeable in the aerospace field and they wanted to get an aerospace engineer and train them in electrical engineering. It meant so much that he was willing to invest in me and there’s nothing that’s more powerful than someone who is willing to take a chance on you.”

"There's nothing that's more powerful than someone who is willing to take a chance on you."

As part of the EmPOWERment Research In Sustainable Energy summer program last summer, Mapunda achieved this dream working with NASA and in aviation, albeit through working entirely virtual from China. He worked at the Center of Automotive Research on the NASA University Leadership Initiative project with Professor Giorgio Rizzoni and Research Scientist Matilde D’Arpino.

“I was introduced to Dr. Matilde when I first started my internship,” said Mapunda. “In the beginning we exchanged a lot of ideas on how I could contribute to the project. One thing that I really like about her is that she has a way of asking questions that make you really think and push you in the direction you want to go. I thought ‘If this is how Dr’s Rizzoni and Matilde are, I can’t imagine how the rest of the crew is!  I knew it was going to be tough, but I had to go for it and accept the internship offer at Ohio State!”

As a doctoral student, Mapunda is continuing his work with Rizzoni in the sector of sustainable vehicles, looking into developing models for electric and hybrid aviation. Mapunda hopes to later have a career in advanced air mobility and propulsion as an engineer and educator. He hopes to be seen as an inspiration to other kids that anyone from anywhere can achieve their goals.

“I want to inspire youths in my position and be that person that they can look up to like my friend was for me,” he said. “As kids, we grew being told, ‘study this and get that job, don’t do that it’s too risky,’ but here he was telling me, let’s do something we love and BE different.”