Signs of spring include green grass, warmer temperatures and a bustling Motorsports garage.  Members of the student Motorsports team are gearing up for a busy competition season! 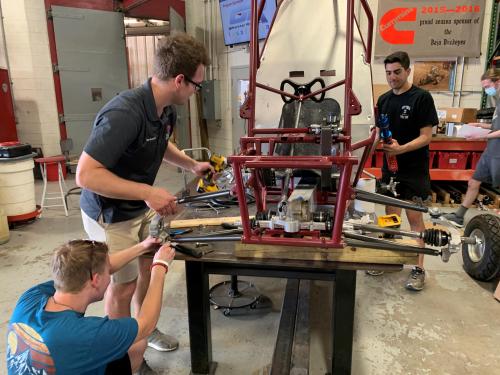 The Baja Buckeyes are looking to their alumni to get a leg up on the design presentation portion of the 2022 competition this June in Rochester, NY.

In addition to dynamic and endurance events, which involve hill climbs, racing and maneuverability challenges, there is also a design aspect of the competition where teams are required to present their design to judges who, in turn provide critiques, feedback, and a score; this score is used in the overall placement of the teams for the competition.

“In preparation for competition, we implemented conceptual, preliminary and final design reviews, and brought in our alumni to give us their opinions and feedback,” said Pantelis Anton, vice president and suspension lead for the Baja Buckeyes. “Once the car is built, we plan on allowing ourselves a month of internal reviews where we can fine tune and tweak our design presentations and then have a final review with our alumni before competition.”

In addition to design prep, the team is ahead of schedule in their build as well.

“We have put countless hours and a lot of thought into this year’s vehicle,” said Anton. “Therefore, the entire team is ecstatic to see the car run at our track and competition. This year we will be having eighteen members join us at competition to help gain experience and celebrate our build.”

Buckeye Current: Back to Motorcycles

For Team Lead, John Mulh this will be his first competition since joining the team three years ago. That’s because Covid, among other things, cancelled the electric motorcycle competitions they were planning to compete in at Pikes Peak and Isle of Man in 2020 and 2021.

“The team decided to transition to dirt bikes to give ourselves something to do when competitions weren’t available,” said Mulh. “But we weren’t really that interested in it, we wanted to go fast. So, the natural option was to try and get the landspeed record.”

Buckeye Current will compete in the 150kg electric motorcycle category at the Bonneville Motorcycle Speed Trials in late August. A 150kg motorcycle is extremely light.  To put it in perspective, the bike the team raced at Pikes Peak housed a 100kg battery pack.

‘The weight is the main challenge,” said Mulh. “Trying to get as much power as you can with the least amount of weight while balancing the battery pack and electric motor. Building the bike to fit this category is a huge engineering challenge, but the team is very excited to compete again!”

EcoCAR: Gearing Up for Year Four

The Ohio State EcoCAR team is putting the final touches on their Chevy Blazer to have it ready for competition which starts on May 9 in Yuma, AZ.

“This being year four of the competition, it’s all about delivering a final product,” said Colin Knight, Project Manager for the team. “We’re finalizing the aesthetics, putting all of the carpet and interior panels back in, (some of which we fabricated ourselves), and making the Blazer look like it rolled off a showroom floor before it ships out in a couple of weeks.”

In addition to the vehicle being tested for consumer appeal, it’s also tested based on how it drives. For example, when the power for the vehicle switches from the electric motor to the gas engine, there should be a smooth transition. For added complexity, the vehicle will also undergo rigorous testing of its advanced driver assistance systems like adaptive cruise control and V2x technology.

When asked if the team felt ready for competition, Knight said “Honestly, I don’t think we’ll ever feel prepared. Historically, the team has done really well at competition and we put a lot of pressure on ourselves to do well. But we have a strong team that is dedicated to seeing it through.”

The Formula Buckeyes will head to the Michigan International Speedway on May 18 for the 2022 competition to find out which collegiate team can design and build the best racecar.

The team’s primary focus this year is the endurance portion of the competition which is held on a smaller style autocross track where each car must drive 22km. The team is not allowed to touch the car but is allowed one driver change.

“The goal is to finish,” said McIlvaine. “If anything breaks or falls off during that event you’re immediately disqualified, so having a car that can run perfectly for 30 minutes is the main goal.”

The competition requires each team to rebuild their vehicle every year. The team used quite a few of the designs from last year but opted for a brand new tub and rear frame.

“We took the endurance event into account and made changes to this year’s vehicle focused specifically on reliability,” said McIlvaine.

On April 23, the Formula Buckeyes debuted their 2022 vehicle at a rollout event hosted at CAR. Alumni, family and friends filled the CAR hi-bay and heard from some of the team members and watch a video the team created for the event.

“Having the rollout event in April forced us to finish the build early, so we have a lot of testing time, something we didn’t have last year,” said McIlvaine. “This will set us up better for competition. One of the biggest factors in placing well is definitely testing.”

The Buckeye AutoDrive team is gearing up for their first competition in the SAE AutoDrive Challenge at the University of Michigan’s M-City, where they will compete against nine other teams to develop and demonstrate an autonomous vehicle that can navigate urban driving courses as described by SAE Standard (J3016™) Level 4 automation.

In year one of the 4-year challenge, the team will create a concept design for autonomous vehicle perception systems on a CART which will demonstrate how the CART and in future actual CAR can perceive things like highway signs and objects and intersection traffic lights. They will also compete in a MathWorks Simulation Challenge which involves waypoint following, interaction with traffic lights and signs and decision logic and also collision avoidance.

“The Buckeye Autodrive team is working very hard and we are really very excited for the first year of the competition,” said Rohit Sanket, Buckeye AutoDrive project manager. There are definitely a few roadblocks that we are facing but we are confident that we will be able to overcome all the issues and perform well in the competition!”