Ground or Air, Max Wright has a Passion for Things that Move 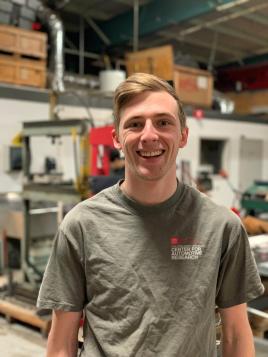 Max Wright is no stranger to the Center for Automotive Research (CAR). As a student you could find him in the Student Projects building as part of the Formula Team, and now, you’ll find him there in his new role as Laboratory Project Supervisor.

In his role, Wright oversees the facilities operations for the student project building including the strategic planning and day-to-day operations. This role also provides supervision and training for undergraduate and graduate-level students on use of machine tools and processes.

“The Student Projects building is one of the best examples of where classroom learning is applied in the most real-world ways possible,” said Wright. “Students are able to take classroom knowledge and combine that with the pressures of the work world. I love being able to assist the students in their journey through motorsports. No matter the skill level of any student, we are happy to help them grow in the fields that they are interested in.”

In addition to his passion for helping students build vehicles on the ground, he also has a passion for flight. Wright is currently finishing up his commercial pilot’s license; his last step in the flight program at Ohio State’s Center for Aviation Studies. 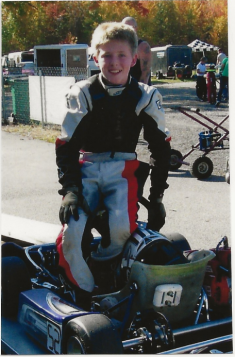 “Right now, I'm an instrument pilot which means I can fly inside the clouds and fly without visual reference to the ground. Once I receive my commercial pilots license, I can fly people around for monetary gain,” said Wright.

Since he was little, Wright has always been interested in things that move.

“Every time there was an air show at the airport close to where I grew up, it was very enticing,” said Wright. “I wanted to go, be a part of it and learn more about it because I saw it was a part of the world that wasn't easily accessible to everyone. I wanted to help change that and I knew, if I could get involved in it, then I can do my part to allow other people to experience that greatness.”

When he wasn’t at air shows, Wright was behind the wheel racing go-karts at the young age of six.

“I tried basketball and baseball and those didn't really do it for me,” said Wright. “Then I got bit by the racing bug and I found my love and my passion and that has translated into the motorsports program where I’m now able to help students who have the same passions as I do.”

“I feel that the Motorsports program and the College of Engineering Aviation Department really do go hand in hand from the standpoint of allowing students to push their own boundaries and to allow them to explore new things that they didn’t think they could do,” said Wright. “Both of those areas do an outstanding job of pushing their students to do better for themselves, better for their community and better for Columbus overall!”