In their first year, the Ohio State University Buckeye AutoDrive team finished in second place in year one of the SAE AutoDrive Challenge II.

Sponsored by SAE International and General Motors, Ohio State along with nine other universities are challenged with developing and demonstrating an autonomous vehicle (AV) that can navigate urban driving courses as described by SAE Level 4 automation in this four-year competition. 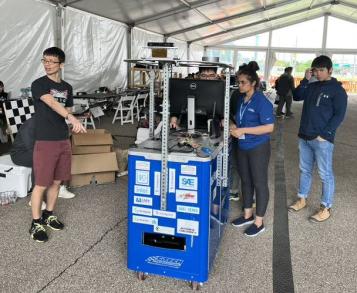 Year one of the competition week was held June 6-12 in Ann Arbor, Michigan, and focused on the initial skillset required for designing and developing AVs. During the weeklong competition, the teams were tasked with achieving three objectives with a system integrated into a portable cart. A Traffic Light Challenge was performed where the cart was placed at intersections with various types and locations of traffic lights. The teams were scored on their accuracy of reporting the traffic light status over controller area network (CAN) communication. During the Highway Challenge, the cart was placed at various locations on the highway section of Ann Arbor’s M-City. Traffic barrels, cones, signs and static vehicles were placed on the road, and teams were judged on the accuracy of reporting these object locations over CAN communication. And finally, in the Dynamic Obstacle Challenge the carts were placed in three locations and the teams were required to accurately track and report their locations over CAN.

The teams were also required to give presentations on the MathWorks Simulation Challenge where they performed Waypoint Following, Collision Avoidance, Traffic Light and Sign Interaction and route planning, waypoint following and requirement traceability, as well as a concept design report and project management report.

“In their first year in the AutoDrive Competition, I was impressed with the team’s showing, especially in the static events,” said Ohio State’s General Motors Team Mentor, Alex Pax. “The team did well distributing the workload and allowing many students to be involved in different aspects. I would also like to commend the faculty on their leadership and guidance throughout the year.”

The Buckeyes also were recognized for outstanding performance across various events throughout the competition, taking home an impressive six awards overall.

“It was really amazing to see how the team kept themselves composed during the high pressure times, “said Faculty Advisor Qadeer Ahmed. “It was an amazing team effort and the team leads deserve much of the credit! They got a good taste of how things go in real life!”