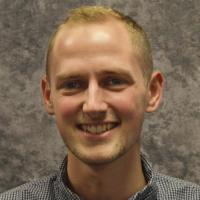 While he was pursuing his master’s degree in mechanical engineering at Ohio State, Cody O’Meara was a graduate research assistant at the Center for Automotive Research (CAR). In his time there between 2016 and 2018, most of his work focused on battery research.

O’Meara got involved with the CAR during a tour for his master’s program where he met CAR Director Giorgio Rizzoni and Associate Director Marcello Canova. This tour was enough to interest him, and he ended up joining CAR when he began his masters research.

O’Meara said he always knew he wanted his work to focus on sustainability but wasn’t sure where exactly his research would fall. “But when I visited CAR and talked to professors Canova and Rizzoni about their research related to batteries, I knew that was what I wanted to do with my career,” he remarks. He also noted that he saw potential for a long career in the field, knowing there would always be new challenges to keep his interest.

During his time at CAR, O’Meara worked with Professors Jung-Hyun Kim and Canova and was also one of the founding members of the Smart Campus student organization. While in this organization, he was involved with Buckeye Precious Plastic Project, which won a $25,000 grant for recycling plastic. O’Meara noted that one of his biggest takeaways from this organization was its self-sustainability. After stepping down from his position in Smart Campus, the organization continued to grow and thrive. This is no different than the projects O’Meara has been involved with professionally since graduating.

With Professors Kim and Canova, O’Meara worked on various projects involving lithium-ion batteries and improving energy density with new materials. He also completed a summer internship with NASA Glenn in Cleveland, Ohio. During this internship, he found out that they have a battery group and was able to connect with the right people and ended up being selected to work there.

At NASA Glenn, he continued his work with batteries and now conducts research in the space and aeronautics fields. Some of the projects he has been involved with include the SPARRCI project as well as electrifying aircraft.

“I would not be here if it weren’t for CAR and the education and hands-on experience I got when I was a student there,” noted O’Meara. “Between the classes, professors, doing research – all of that gave me the tools and the skills to be able to join NASA. CAR was definitely paramount to my journey and where I am now.”

CAR welcomes back visiting scholars for first time since pandemic