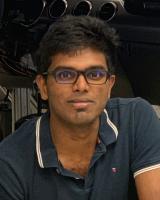 Ruban Sekar has spent a majority of his time at The Ohio State University working at the Driving Dynamics Lab (DDL) at the Center for Automotive Research. In his time there, he has made significant contributions to the advancement of the lab, and his hard work helped secure him a job at Ford Motor Company, where he will start this fall.

His mentor, Research Scientist Jeff Chrstos who oversees the DDL, has had a positive impact on his research activities. Sekar, who will graduate with a master’s degree in electrical and computer engineering this summer, says that Chrstos’ lifelong interest in motorsport and performance cars gave him valuable exposure to the automotive industry.

Sekar says, “I never dreamt of working and hearing stories from someone with such knowledge.”

The DDL is home to the Vehicle Dynamics Driver-in-the-Loop (VDDIL) simulator, which gives students and staff the opportunity to capture how a driver responds to different driving conditions and sends them to the driver for feedback, which is in turn beneficial to industry, researchers, and government agencies.

Sekar has taken on a multitude of different projects while working in the DDL. He describes his work on driving simulator characterization, validation and simulator motion evaluation to be his most notable works, which resulted in his master’s thesis and project. 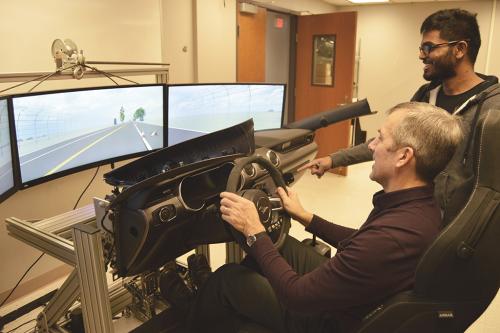 Most of the projects that Sekar worked on were funded by Ford through its Alliance framework and CAR’s Member Consortium program. This partnership enabled Sekar to show off his work to Ford, who offered him a position on the Driver Assist Technology team following graduation.

Chrstos’ described Sekar’s years of work with Ford in the DDL as “one extended, successful interview.”

The two have been working together since 2018 and Chrstos says that in those years, Sekar has become more and more important to the DDL. Now that his time at the lab is coming to an end, Sekar is almost running the lab. He has brought a new student up to speed on the lab and its equipment in light of his departure.

Sekar says, “Simulator and other research have helped me establish a healthy network with the industry and even presented internship and full-time opportunities through my work at DDL. I’m glad to say I’m completing a circle by heading to Ford Motor Company after working on several Ford-funded projects for most of my graduate studies.”

CAR welcomes back visiting scholars for first time since pandemic