If you were at the Center of Automotive Research (CAR) this summer, you may have noticed some new faces. More than 10 high school and college students joined us for the summer, gaining hands on experience with research projects and working with our researchers and graduate students. Here are what a few of our interns had to say about their experience. 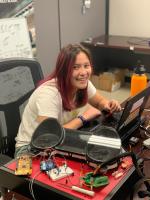 Columbus School for Girls (CSG) rising senior, Lina Jeffers got her first taste of CAR as a member of the CSG Robotics Team which operates out of the Motorsports Building. This summer, she experienced CAR in a different way as an intern with the Buckeye AutoDrive team.

Within the team, Lina focused on the Controller Area Network (CAN). She learned how different devices in the vehicle talk to each other on CAN. She then set up CAN on her own and used Arduino to send CAN messages to the speedometer and display different signals on it.

“I really liked talking to everyone who has helped me out and hearing about all the cool projects going on at CAR,” said Jeffers. 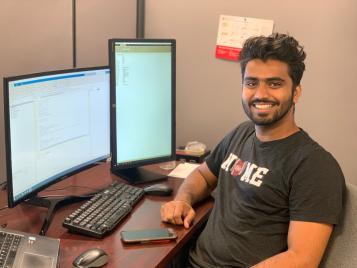 Nabin Regmi, a master's student in the Department of Mechanical Engineering says that CAR is what attracted him to Ohio State to pursue his master’s degree.

“I’m interested in electric vehicles and was impressed with all of the work that CAR does in that area,” said Regmi.

As a CAR intern, Regmi spent his summer working with Research Scientist Matilde D’Arpino and Research Associate Faissal El Idrissi on developing a tool to design a battery pack.

Regmi says this was the first time he’s had the chance to work on a project like this and he really enjoyed it!

“I’m very grateful to Dr. Matilde and Faissal for giving me the opportunity to gain hands-on experience and apply what I learned in the classroom to real-world projects,” said Regmi. 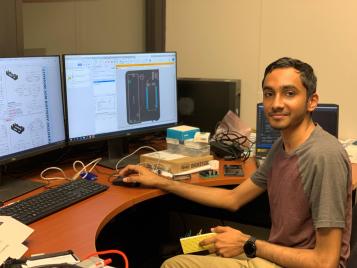 Varun Meyyappan, an undergraduate student studying mechanical engineering spent his summer in the Battery Lab designing a system that uploads all the battery lab data to the cloud as well as notifying the user if something goes wrong while a test is running.

“This is important as the user does not have access to the lab at all times and if something goes wrong when they are away,” said Meyyappan. “They can reach the lab in time to prevent things from getting worse.”

Meyyappan says that one of his favorite parts of his internship was getting to use Fusion 360, a modeling tool that he used to make custom PCB’s. “It was really fun,” said Meyyappan.

While most of the work in the Battery Lab is focused on electrical engineering, Meyyappan says that as a mechanical engineering student, having this additional knowledge will be beneficial to him in the future. 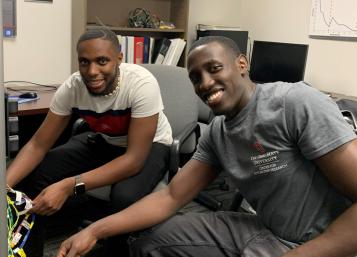 The students spent the summer at CAR getting to know other EcoCAR team members and collecting data as they enter year one of the four-year competition.

“At the beginning of the summer we didn’t know anything about coding or MatLab, but we’ve learned so much and are so grateful for this experience,” said Nshimiyimana.

In addition to data collection, the two have enjoyed the hands-on experiences they’ve gained such as learning how to perform an oil change and working on a cars alignment.

Once the summer is over, Nshimiyimana and Rubibi will take what they’ve learned back with them to Wilberforce and continuing working with the EcoCAR team there.

“I want to thank the Ohio State EcoCAR team for being so welcoming,” said Rubibi. “We’re so grateful for this opportunity and for Wilberforce to be able to partner with Ohio State!”

Khaled Alsharif, a masters student from Youngstown State University spent his summer with Research Scientist Matilde D’Arpino and her team working on DC microgrid simulation fault analysis and fault diagnosis. Alsharif was familiar with D’Arpino’s work prior to starting his internship and was very excited for the chance to work with her this summer.

“Dr. D’Arpino has been a great advisor,” said Alsharif. “The faculty here are amazing and the diverse group of people I’ve met and made friends with at CAR have made me feel very welcome!”

Alsharif finds the work he did very interesting and says his favorite part was working with hardware and testing battery packs. He hopes to continue on at CAR in the fall and eventually pursue his PhD at Ohio Sta