The history of the Buckeye Bullet

The quest for a landspeed record started with a request. In 1993, Department of Mechanical Engineering Chair Larry Kennedy asked then Assistant Professor Giorgio Rizzoni, to advise a new electric vehicle student racing team. This week, a 20-member student team is preparing—and hoping—to propel the Venturi Buckeye Bullet 3 to reach 400mph and beat their own record for the fastest electric vehicle in the world.

The Road to the Record

Ohio State’s involvement in electric racing began in the Formula Lightning series. Led by Giorgio Rizzoni, who is now director of the Center for Automotive Research, Ohio State raced their vehicle, the Smokin’ Buckeye, from 1993-2000. The series was a collegiate open wheel formula style race that traveled to major racetracks around the country. Thirty-one lead acid batteries powered the vehicle and by the end of the series the team could do a full pit stop/battery change in under 17 seconds. Ohio State dominated the competition, winning more than 50% of the races entered and every national championship ever awarded.

As the Formula Lightning series was phased out in 2000, the team found themselves with a great deal of electric racing experience, but no venue in which to put it to use.

The Smokin’ Buckeye in the pits during a Formula Lightning race

At the team’s farewell dinner, Jeff Kletrovets, vice president of Shoemaker Electric, the Smokin’ Buckeye’s title sponsor, asked, “How fast has an electric car gone?” Answer: 245mph. To that Jeff responded, “If we build a custom motor, can Ohio State design a vehicle to break the record?” That very night they sketched out the framework for the Buckeye Bullet on the back of a napkin at a local Mexican restaurant. The Buckeye Bullet was born, or at least conceived.

Before building a dedicated landspeed vehicle, the team decided to convert the Smokin’ Buckeye open wheel car for use at the Bonneville Salt Flats and set out to educate themselves on high-speed, timed racing.

In 2001 the team met with Rizzoni and his initial response to the team’s idea was “300mph, you’ve got to be kidding me, no way!” After some additional design work, the team convinced Rizzoni to be more open-minded. “Well, you took my system dynamics class,” he said “go build a model-based simulator and show me what you can do.”

The team’s persistence and simulation results compelled Rizzoni to approach the dean of the College of Engineering with the idea for the Buckeye Bullet student project team.

Between 2001 and 2004, most of the team’s time was spent designing, building and modifying the Buckeye Bullet 1. It made its debut on the Bonneville Salt Flats in 2002, piloted by retired US Navy pilot Craig Taylor, an accomplished racing driver and driveline expert.  He worked closely with the team on the mechanical design and setup of the vehicle.  In 2003, professional test driver Roger Schroer took the wheel. The next year, the Buckeye Bullet 1 became the first electric vehicle to break 300mph, 314.958mph to be exact.

The Buckeye Bullet 1 became the world’s fastest battery vehicle. The team set the US record, but never attempted to break the FIA world record, it was too expensive an endeavor for the additional certification. While they were the fastest ever recorded, they were not “officially” the fastest in the world.

At the end of the 2004 racing season, the team decided that the Buckeye Bullet 1 had done what it was built to do safely, but it wasn’t designed to go any faster. The team spent 2004-2006 finding sponsors, rebuilding funds and dreaming about what was next.

“It was truly a student effort,” said David Cooke, researcher at the Center for Automotive Research and former Bullet team leader. “Little cash but lots of hard work, long hours and a persistent drive for success were the foundation of this program from day one. In the Ohio State Motorsports programs the students do it all, from engineering concept, design, manufacturing, prototyping and testing to program management, fund raising, media relations and outreach.”

By 2006 the team had assessed the available battery technology and determined that a second generation Buckeye Bullet powered by batteries would have minimal performance improvement.  But during this period there was a huge boom in hydrogen fuel cell research.  With the current world record for fuel cells under 100mph, the team set out with the very ambitious goal to design and build the first hydrogen vehicle to break 300mph.

The Buckeye Bullet 2 (BB2) development program provided the students with an opportunity of a lifetime to work on something truly special. While the BB1 was built completely by students, the technical challenges were tremendously higher this time and required professional guidance. After circulating this idea to many potential partners, a technical leader at Ford Motor Company took a look at the team’s plans and was extremely impressed, but had two issues.  First, the team gave themselves 18 months to build the vehicle to arrive at the Salt Flats in August 2008, but he wanted to be there a year sooner! Secondly, he wanted to build a car to compete alongside the BB2 based on a production body Ford vehicle.

Together, Ford, Ballard and the Bullet team produced the student-led Buckeye Bullet 2 (BB2) streamliner and the Ford-led Hydrogen 999 Ford Fusion. In 2007 the Fusion became the first “production body” hydrogen vehicle to go over 200mph. While the Bullet did go faster than the 999, it was far shy of the 300mph goal. Pictured here: The BB2 and the Hydrogen 999 at the starting line. Photo credit: Giorgio Rizzoni

When the 2008 recession hit the auto industry, it also made an impact on the progress of the Bullet. Ford was forced to cease support, which left the team with a very expensive project but no major sponsor. Ballard continued to support the team the best they could, but also felt the pressure of the recession.

The team survived the 2008 season without Ford, but needed one more year to really get where they wanted to be.

Back in 2007, Gildo Pastor, owner of the boutique luxury vehicle manufacturer, Venturi Automobiles, based in the city-state of Monaco, approached Cooke. Pastor wanted to get Venturi involved, but at that time the team’s major sponsor was Ford and Cooke didn’t want to jeopardize that relationship.

After Ford’s tough decision to end their support, David and Gildo reconnected and agreed that if Venturi would sponsor the team’s trip to Bonneville in 2009 for the final record attempts with the hydrogen-fueled vehicle, the two organizations would work together the following year on a new battery powered vehicle.

It was the final week of racing on the Salt Flats, the Bullet’s last chance to beat the record… and the motor blew up. The team was exhausted and almost threw in the towel, but they were so close to breaking the record, they had now invested four years and nearly $3 million dollars chasing. They identified a local shop that built electric motors. After much negotiating, begging and pleading, the engine was out of the vehicle, fixed and reinstalled in 35 hours. When the last bolt was tightened, there were only six hours left to make runs before the vehicle would be retired forever.

As the sun came up on the final day of racing, the Bullet rolled out on the track and was ready to run.

With one hour remaining, the team decided to squeeze in another set of runs.  First 297mph, then 300mph! But the two-way average was still shy of their 300mph goal.

Not willing to give up, they convinced the organizers to let them have two more runs, and that was all they needed.  The team’s control’s engineers studied the data like they were prepping for final exams and found every possible opportunity for a few mph, shaving milliseconds off the shifts and decreasing the torque ramp rates.

The first run was 300mph, and the backup run just one hour later was 306mph. The team had done it, a two-way average FIA World Record of 303mph!

According to the event organizers, that was the first time six 300mph runs had taken place in a single day by one vehicle in 100 years of Bonneville racing.

The team had gone through significant turnover and the young team was not experienced enough to build a whole new car. Instead they converted the existing car into a lithium ion battery powered car and used it to test the state of the art technology and train the new team members.

After a year of building a completely custom battery pack and updating the vehicle, they returned to Bonneville to test the new Venturi Buckeye Bullet 2.5 (VBB2.5).

With the financial support of Venturi, the VBB2.5 was able to do something the Buckeye Bullet 1 never could, challenge the FIA world record for electric vehicles.  In August of 2010 the VBB2.5 became the undisputed World’s Fastest Electric Vehicle at 307.666mph.

The team now held both US and international records for both battery and hydrogen powered electric vehicles in the unlimited weight class, all over 300mph. To date, every electric vehicle that has exceed 300mph on the race track has been designed and built by students at Ohio State.

The experience that the VBB2.5 provided set the stage to build a new vehicle from the ground up with the latest technology - the ultimate electric race car. From 2010 to 2012 the team worked closely with Venturi to define goals for the program and identify technology partners.

From day one of the VBB3 program there was one goal. The team was tired of being “Fast……. for an electric car” or “Fast………. for a bunch of students.” The team wanted to be Fast……period! At Bonneville, joining the elite racers means going 400mph and the VBB3 team wanted to have the first electric vehicle to do just that.

After years of computer simulation modeling and design, the team found that to reach 400mph nearly every part of this vehicle would need to be redesigned and rebuilt. In 2013 the build was kicked off and the vehicle was on track for testing from 2013 to the time of this article. Each day, each test, each mph, the team does something the electric vehicle industry has never done before. Despite several years of extremely difficult track conditions and two years of unprecedented event cancellations, the team has reached a top speed of 358mph and increased the two-way world record to 341mph.

September 2017 brought unexpected rain and flooding to the Salt Flats, preventing the team from attempting a new world record. They will continue their quest with hopes of writing the next chapter in the history books.

While the racing is exciting, the performance, staggering and the technology cutting edge, the true value of this program lies in its greatest product, the students. Over the last 25 years more than 100 students have dedicated their collegiate career to this program and some much, much more. The experience gained pushing technology to the limits while meeting real world design challenges, on time, on budget and safely are an experience which simply can’t be taught in the classroom. The alumni of the program are extremely well rounded, well trained engineers who are the automotive technology leaders of tomorrow.

What’s next for the Bullet? Who knows, but one thing is for sure, it will be coming at you fast! 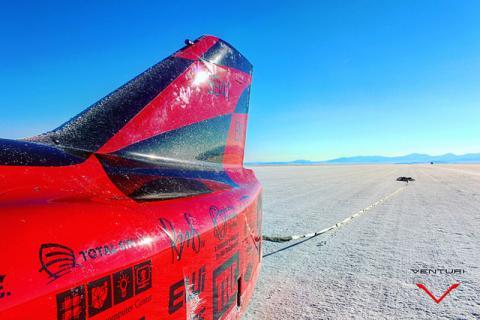