In honor of Veterans Day, we’d like to recognize Robert Sparks, proud veteran of the United States Navy.

Thank you Robert, and all U.S. Veterans, for your service to our country. Happy Veterans Day. 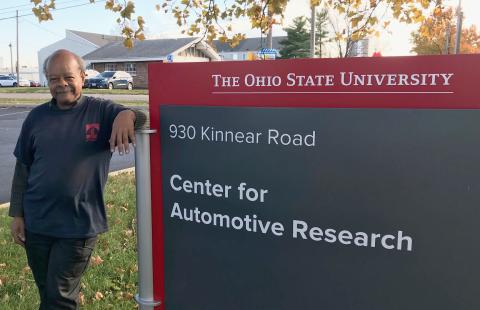 For three years Robert Sparks, a proud veteran of the United States Navy, served sea duty on the USS Bauer.

Robert was a Boatsunmate Seaman responsible for ship maintenance. His duties ranged from taking care of the ship, to steering the ship, to serving as a member of the firing team.  He was chosen to be a Boat Coxswain where he was responsible for taking officers home once their time on the ship ended.

His years in the Navy took him around the world. He traveled to the Philippines, Southeast Asia, Mexico and Oregon - his favorite destination because he enjoyed the people there.

When he wasn’t “living on the water,” as he puts it, Robert was taking in all that San Diego, his home port, had to offer.

“I’d never left Columbus, OH until I enlisted in the Navy,” said Robert, who can be found at the Center for Automotive Research where he makes the building shine. “And California was a long way from home in more ways than one.”

Robert enjoyed his time in San Diego and made countless friends who affectionately nicknamed him ‘Shorty.’ “When we were on leave many of us would choose to stay on base and explore the city together,” he said.

The oldest of seven sons, Robert was one of three to join the military.

“One day I was told I had a visitor and I couldn’t imagine who was visiting me all the way from Columbus, but it was my brother! He was stationed nearby in Riverside, CA,” said Robert.

Unlike many Veterans who served in the 70’s, Robert wasn’t drafted, he enlisted. “I was Classification-1A which meant they could call me up at any time. So instead of waiting around, I enlisted myself,” he said.

Robert didn’t originally plan on enlisting in the Navy, his first choice was the Marine Corps. But after finding out at his physical that he was 2lbs under the required weight limit, his paperwork was transferred to the Navy and less than 48 hours later he was boarding a plane at Port Columbus headed to Chicago for basic training.